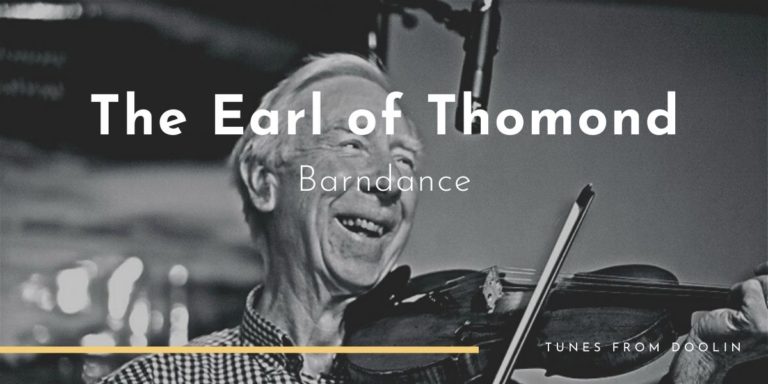 Earl of Thomond (The)

“The Earl of Thomond” is a barndance composed by Charlie Lennon. He wrote this tune for Tony O’Connell, concertina player from Limerick, who recorded a lovely album with Ben Lennon (Charlie’s brother) called “Rossinver Braes”. Charlie Lennon actually wrote another barndance that goes before “The Earl of Thomond”, which he called “Lord Leitrim” for his brother Ben. They make a lovely set together which I learned directly from Tony O’Connell.

“The Hare’s Paw” was one of the first reel I ever learned. I got it from my friend Stéphane and Paul Dooley (fiddle/harp) at a session in McHugh’s Pub in Liscannor. A common set in the area is to play “The Hare’s Paw” before another great tune, “The Concert Reel”.

A very common session tune, “The Galway Rambler” was one of the first reel I ever learned. It was my friend Gilles Tabary who taught it to me in Switzerland. I associate this tune with flute player Adrian McMahon from Kilfenora, with whom I have enjoyed many good sessions these past few years.

“The Gatehouse Maid” is a reel I learned from Noel O’Donoghue. after a lovely session together with Murty Ryan (accordion) and Seanie McGrath (bouzouki). This tune is very often played after “Down The Broom”, it is a popular sets which has been recorded several times.