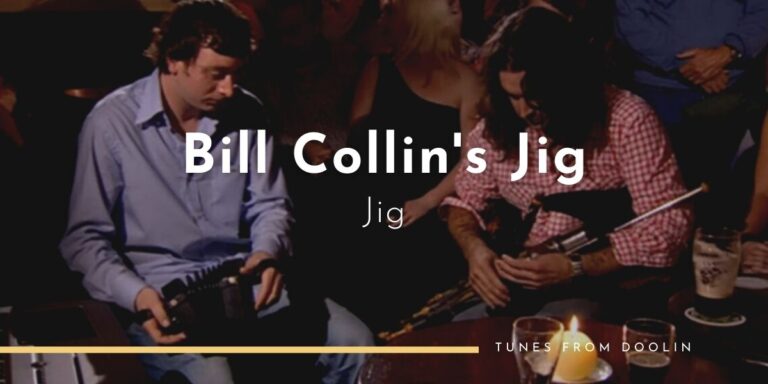 I learned Bill Collin’s Jig from Hugh Healy and Blackie O’Connell’s album “We Were Drinking And Kissing The Ladies”. It is a very nice jig that is quite common in sessions. They call it “The Harty Boys” on their album, however the names “Bill Collin’s Jig” or “Dan Collin’s Father” seem to be more common. Actually this tune seems to have been mixed up with another jig called “The Hearty Boys of Ballymote” which maybe explains the name.

Bill Collin’s was a musician from Gort, co. Galway, and was the father of Dan Collin’s, co-founder of the American record label Shanachie.

I posted a recording of this video on the Tunes From Doolin YouTube channel, you can watch it below!

A composition from flute player Josie McDermott, “Darby’s Farewell to London” is usually played after one of my favourite reels, “The Trip To Birmingham”, which is another composition of Josie McDermott. I learned this set from Colette Coen, a friend from the Sligo / Leitrim area who plays whistle and flute.

I don’t remember where I got this slide, “An Chóisir”, exactly, but I think it was during one of my visit to Dingle in West Kerry.
Séamus Begley & Steve Cooney play a great version of that tune on their legendary album “Meitheal”.

“The Maho Snaps” is a lovely little jig that I got from Terry Bingham during the Russell Memorial Weekend a few years back. I believe Terry got this tunes from Cathal McConnell, the flute player with The Boys Of The Lough.